This painting was rejected by a site that accepts stick figures.  I had a hunch I’d have problems selling prints of this painting.  The concept of blocking an artist from selling their own work is absolutely Lucretius…er, no wait, that would be ‘ludicrous’.  If you click on Lady Gaga (as a fish), you’ll find she’s linked to my Redbubble website.  I link almost everything back to Redbubble because I have never had any trouble with Redbubble (ha – it rhymes)!

The problem is when I try to post my work on Zazzle.  If you click on this word here “Zazzle“, it will open up a window to where I’ve posted her (for the third time).  The first two times, my Gaga-Fish was removed and I was given a “notice.”   I’m dying to know, is my parody (as I would like to call it) not funny enough to be considered parody, in which case, is un-funny satire thrown in the pile with copyright infringement? 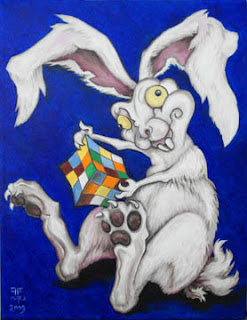 This isn’t the first image Zazzle removed.  About a year or two ago, the Rubik company decided it would be a fun idea to demand that Zazzle remove my bunny image (to your right…as if I really need to give written instruction as to where this image can be located on this blogpost).  In the case of the bunny, I re-titled it from “Rubik’s Rabbit” to something else and changed my key words to remove all trace of the term “Rubik”.  But, seriously, folks, that’s what it is, that’s how I painted it, and my intent was exclusively satirical.  I wonder how much money Rubik really thinks I make off of this.  It’s not a whole lot, I can tell you that.  Legally speaking, if I can’t sell prints of my work, I probably can’t sell the original paintings and that means this society is dictating what I can and cannot produce as an artist.